On October 3, 2019, Sony shut down the Sketch online service, and a few days later the app was removed from Google Play and the App Store. At the time of the shutdown, Sketch had millions of users, and hundreds of millions of drawings stored in the cloud.

Sony was still an important player in the mobile phone market in 2013, and the company was trying to capture a larger portion of the premium segment with the Xperia Z line of models. The most peculiar in the line-up was the Z Ultra - a phone so big it was hard to fit it into your pocket. It had an amazing feature though - you could use it with an ordinary pencil.

The team I had recently joined were tasked with building a drawing app for the Z Ultra.

The guiding principle of Sketch was that it should be very easy to use. Advanced features were not welcome. Version 1.0 had a palette of 16 colors, and a fixed set of about 40 stickers. There were no layers, no text, and no online features.

The Sketch app was nearly canceled several times during its lifetime, but each time we we held on for a little while longer. We did several internal demos that showed the app's future potential, including a functional frame-by-frame animation tool with GIF support! Unfortunately we never had time to finish it.

The first online features in Sketch were a sticker store and cloud backup, which were both popular. Then came private collaborations, which virtually nobody used. 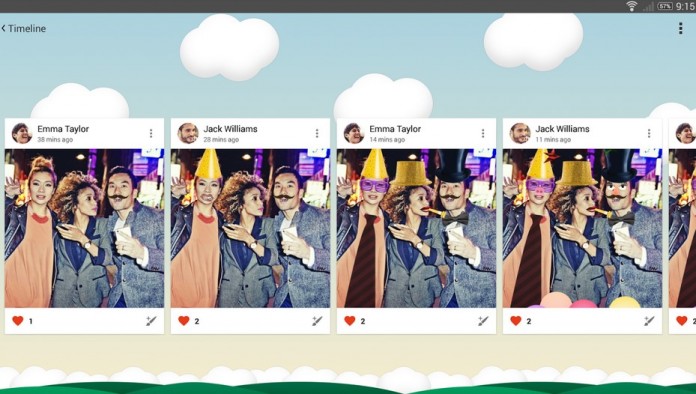 One good thing came out of it though; in order for private collaborations to work, your drawing partner had to have the app, and thus Sketch was launched on Google Play. The app received good reviews, and in the app testing forum, something interesting started to appear - art!

The thought of art coming out of our little app was entirely alien to us. We thought users would only use our app for simple doodles and stickers. It turned out that people were spending hours creating intricate and amazing drawings.

To provide a display for all the creations, we launched the Sketch community at the end of 2015. The community was small at first, but kept growing every year, and was bigger than ever when it was closed.

At the end of 2018, Sony decided to shut down Sketch and let the entire team go. The shutdown was announced to users in April 2019. We made attempts to buy out the app and continue it outside of Sony, and while we were close, we failed. Despite the shutdown announcement, more people kept coming to the app, and community activity increased during the summer of 2019. In the final months, the app saw more than one million drawings shared each week.

A few weeks after the shutdown of Sketch, @ohtoe and I launched the first humble but functioning version of the Sketchers United website. A couple of months later we released versions for Android and iOS. We are still missing some very important features, but with the support of sketchers all of the world, we will do our very best to continue the Sketch tradition in the 2020s!

This article was written from the perspective of someone who loved and believed in Sony Sketch. Obviously Sony's leadership did not believe in it as much. I am frequently asked why Sony killed such a popular app. I don't know the complete answer to that; I guess the simple answer is that Sketch was not seen as a priority for the company.